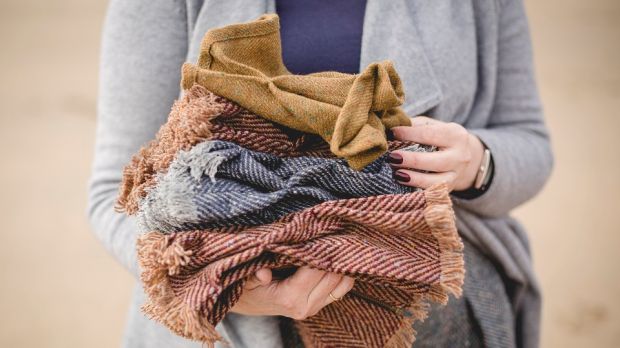 The Story of Home: Stitching a sense of place

In the fourth in the Ulster Bank series, we meet designer Bernie Murphy, whose ‘Homelands’ collection emerges from the landscape around her.

Home means everything to textile artist Bernie Murphy. Based in Porthaw Glen, Buncrana, in her native Donegal, she skilfully intersperses world-renowned Donegal tweed with her own striking, contemporary style. She radiates pride when it comes to speaking about Donegal and has translated the inflections of her surrounding landscape in the capes, collars, tunics, trouser skirts, hats and scarves she designs.

Her studio is based at her home, which is just minutes’ walk from picturesque Porthaw beach. She takes walks there daily to gain inspiration, to recharge and simply to enjoy the joyful bonus of living by the ocean. In fact, she is so influenced by her homeland that she called her first collection exactly that.

“I called my collection ‘Homelands’ because I thought it was very relevant to who I am, where I am and actually each piece within the collection I have named for the townlands and places that have a meaning to me. ‘Magherabeg’ was a childhood place where I had lots of fun playing with friends when we were growing up. ‘Aileach’ is the Grianán of Aileach [a hillfort in Donegal]. So everything has a name and a sense of place of where I am and where I live, and it’s my home,” says Murphy.

This website uses cookies to improve your experience while you navigate through the website. Out of these cookies, the cookies that are categorized as necessary are stored on your browser as they are essential for the working of basic functionalities of the website. We also use third-party cookies that help us analyze and understand how you use this website. These cookies will be stored in your browser only with your consent. You also have the option to opt-out of these cookies. But opting out of some of these cookies may have an effect on your browsing experience.
Necessary Always Enabled
Necessary cookies are absolutely essential for the website to function properly. This category only includes cookies that ensures basic functionalities and security features of the website. These cookies do not store any personal information.
Non-necessary
Any cookies that may not be particularly necessary for the website to function and is used specifically to collect user personal data via analytics, ads, other embedded contents are termed as non-necessary cookies. It is mandatory to procure user consent prior to running these cookies on your website.
SAVE & ACCEPT